ReBranding Your Logo... with Heart!

I was flying to Indiana last month for a conference and invariably picked up Southwest's in-flight magazine, that and maybe Skymall too. The cover of the magazine, not Skymall :) , had a very simple cover: a grayish gradient background with a vibrantly colorful heart. The proverbial lightbulb went off; Southwest had changed their logo and they did it in an impressive fashion. Despite the blazingly obvious fact I was on one of their flights, this logo was completely recognizable and I would venture to guess that anyone who sees this logo would know the company immediately.

How do you change or update your business logo without losing your current customer base? Before enlightening you (that was a joke) let's use Southwest's example. First, let me ask you: can you even remember SW's old logo? I couldn't...

According to their CEO, the 'heart' has always been at the core of this company; in the way they do business and the way it represents them. Their challenge was to make a change that would still convey their brand message yet keep their traditional brand logo recognizable. Every company's logo should represent the brand message of their company without question.

The methodology in updating your logo should be well thought out. It takes time to make even a simple change. Southwest spent months and worked with several major agencies and advertising partners in order to enact the change. It's paramount that you make simple, calculated changes. Test it constantly; utilize focus groups and test it with your employees as well as the masses. After all, your employees are the ones that will be driving your brand on a daily basis. If they aren't on-board then you have a serious issue.

Southwest also changed the font from: an all-caps Helvetica to a softer more modern look.

Some marketers have criticized that it is too, perhaps, ethereal but let's face it, most people love to hate on change in general. I personally love it and think it possesses a much more inviting feel, it correlates with the 'heart' and it directly reflects their brand message. Here's their words, you tell me...

Now, without looking like I am pitching Southwest for a job let's briefly move on to some other creative successes and failures!

As always, do some research, especially if you're changing text. It's unfathomable how many major brands don't do the research! For example, the Sci-Fi channel changed their logo/text to SyFy. To most of us this seemed like a quirky play on words, trying to be clever and I guess phonetically appropriate. The problem was that in most parts of the world SyFy is a slang term for an STD. Alongside this drastic oversight, the logo change imploded and alienated the majority of their loyal fanbase.

Your logo needs to instill immediate recognition of your brand and your brand message.

It is also imperative to make sure you are aware of the cost vs. benefit of the change. My company once pitched a business who fired their last agency because they simply recommended "you need to change your logo, it's outdated"; what this agency didn't take into account was the tens of thousands it would take to rebrand their livery, trucks, media, etc.. The acting agency should have recommended the change with a plan to slowly implement the changes. Slow and methodical changes will go a long way in preserving your brand message.

Finally, don't change your logo like you change your drawers. The best companies with the best logos have only ever made very few, relatively very small changes throughout their existence. Apple was smart enough to realize early on that their initial logo was pretty ridiculous. It was Sir Isaac Newton and the apple if you can't make it out.

I'll leave you with some fun examples. 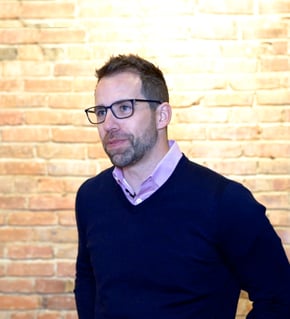 I remember the first time someone said “it would be so fun and easy to be in marketing, creating slogans and commercials for ...
Start Reading
The SIX Team Mar 24, 2016 2 min read

3 Ways To Use Your Competitors For Better Social Marketing

Competition is good for business. It forces you to dream up new products and new campaigns just to outsmart your competitors. ...
Start Reading